A well-developed road network is a key factor to development in both rural and urban areas in Uganda. However, road sector is challenged by a number of factors ranging from financing to weather.

In 2012, Kiryandongo district local government received road equipment machines centrally procured by the Ministry of Works and Transport to help in maintenance and opening up of roads and this was to reduce the costs of hiring from private contractors. Initially the District was hiring a motor grader at 1,200,000/=, wheel loader at 1,200,000/=, roller at 1,200,000/=, water bowser at 480,000/= and a tipper lorry at 250,000/= per day.

Among the equipment Kiryandongo received in 2012 was a grader, tipper lorry, pickup truck JMC and a tractor of Chinese model. This equipment was too weak for the terrain in Kiryandongo and became costly in terms of maintenance which made the district resort to hiring road equipment such as graders from private contractors since FAW Uganda, the supplier used to service the machines at a high cost.

Later on the Ministry of Works and Transport procured new road equipment Komatsu model from Japan in 2017 and Kiryandongo received the first batch comprising of a motor grader and a wheel loader in July,2017. In October 2017, a roller(compactor) was brought followed by a water bowser in November 2017 and two dump trucks in January 2018 making a total of six road maintenance equipment. 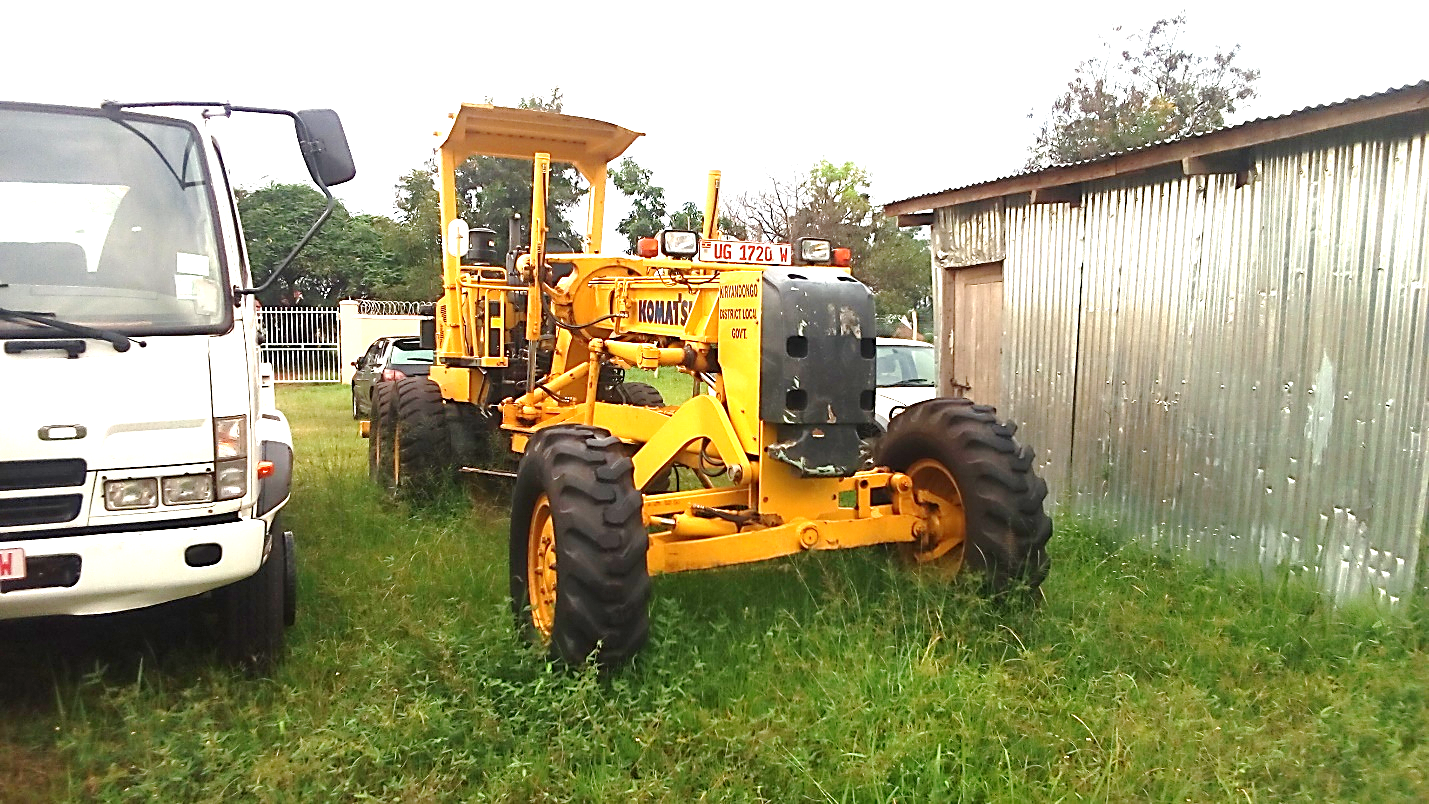 Road maintenance is very easy today and the district can respond to emergencies in case of a damaged road due to weather conditions. The district has not incurred maintenance costs so far since the warranty is still on and is done by Victoria motors the supplier with exception of manageable tear and wear such as tires and greasing.

According to Samuel Muhumuza the District Engineer Kiryandongo, approximately 100 million shillings can service the six road maintenance machines due to tear and wear as opposed to the first grader from china whose maintenance was 84 million with in a space of 10 months and worked on less than 2 Kilometers before it broke down again. With the help of the new road maintenance equipment, more new roads have been opened in Kiryandongo for example Diima-Labongolobo in Mutunda sub county, Nyamalebe-Tecwa in Kiryandongo sub county, Katamarwa streets in KIgumba sub county and Kikaito-Bakweyo road in Masindi port sub county.

The road maintenance equipment has overwhelmed the department of works as every sub county, town councils and individuals keep requesting for the machines to grade their roads. 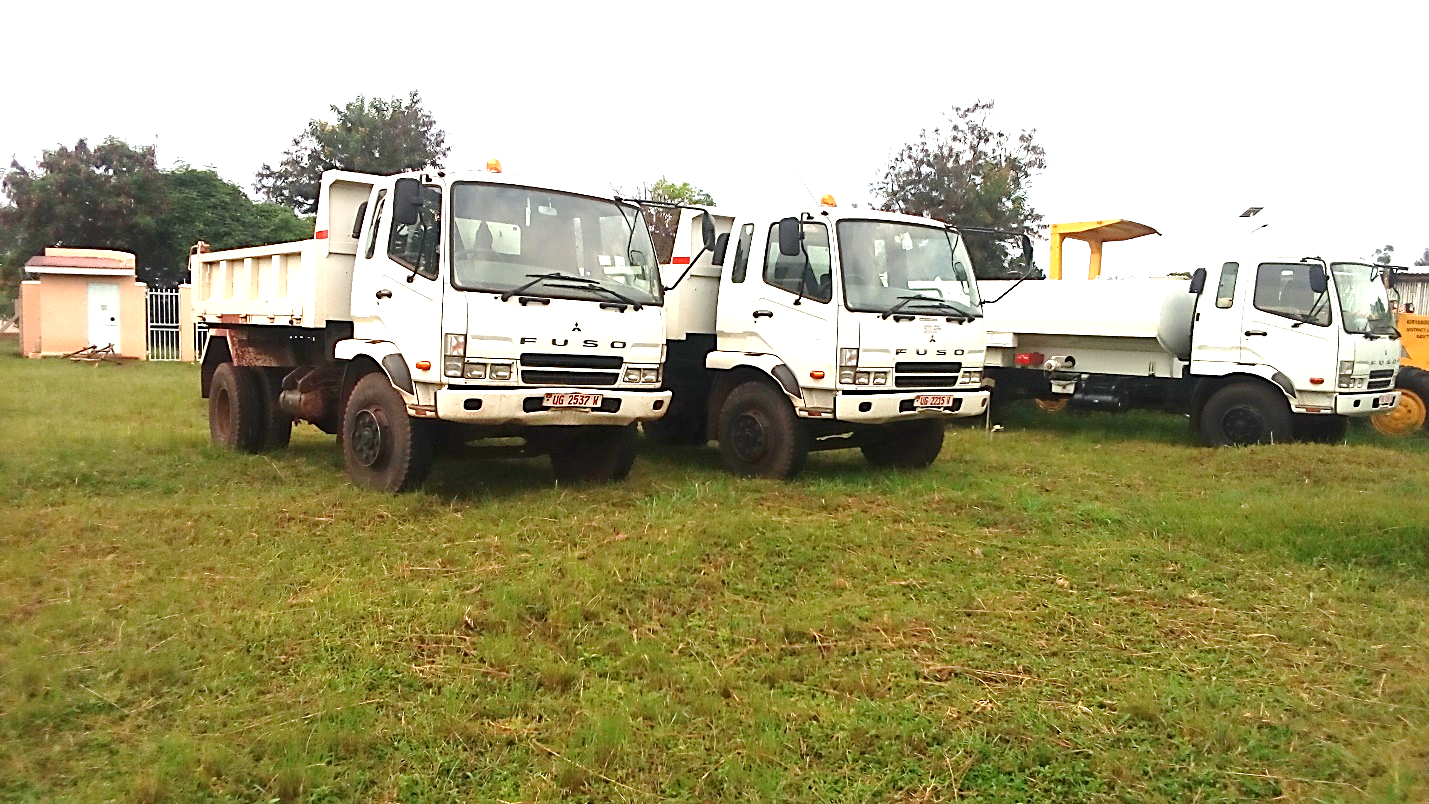 However, the department of works is challenged by the limited expertise of the operators to effectively operate the graders. Muhumuza the District engineer says the operators who were once drivers with the district were taken for training on how to operate the equipment so as to cut the costs of hiring new operators. He adds that the duration of the training was not enough for the operators to fully master the art of using the machines but he is hopeful given the fact that their performance is improving steadily. Road maintenance is a very expensive venture and this explains the reason as to why very few individuals, NGOs and private companies invest in roads.

The engineer calls upon the ministry of works and transport to support the district with a complete road maintenance unit by providing haulage trucks, supervision pickups and increase funds for road maintenance to avoid breakdown of the machines after their warranty.